and addressing the mental health stigma

‘Breathtaking’ was the word Stephanie Roughton of Birmingham Community Healthcare used to describe Alastair Campbell’s presentation on the mental health stigma, Mental Health: Time for a Total Reset – and I wholeheartedly agree.

With a refreshing amount of honesty, Alastair highlighted an issue that most of us find difficult to discuss – mental health and the mental heath stigma.

If you weren’t there live or virtually, I highly recommend watching the recording available here. For a while, we put all politics aside (incidentally, this is one of Alastair’s tips for combatting low days: read a book instead of the newspaper, listen to music instead of the news) and cracked open the taboo of mental illness.

Alastair detailed his own struggles with mental health and the experience he has had discussing mental health healthcare professionals. He also talked through how he has found to look after himself on low days while stopping himself from apologetic for an illness out of his control.

One part of the session that stood out for me was when he recounted a discussion with a nurse who had bipolar disorder. She told him she would invent elaborate workarounds to avoid letting her colleagues or her local GP know for fear that she would have the illness used against her.

At first, I thought it sounded ridiculous before I realised I’d never disclosed details about my own mental health to any of my employers. Without even realising, I’d been withholding information about myself due to the fear that someone would pass judgements on me because of my own mental health.

To see Alastair confidently state to a room full of many dozens of peers that he has suffered from depression, psychosis, and suicidal ideation was both shocking and reassuring, but going further than that, he outlined the method he’d received from a psychologist in Canada. This is where the jam jar comes in. 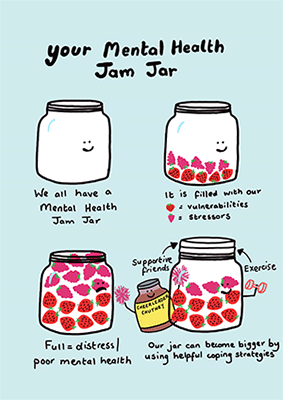 To summarise, your mental health can be visualised as a jam jar. This jar is filled with things that make you unhappy, some of which are recent or ongoing, others might be long-endured and deep-rooted, your genetics might determine some. When your jar becomes full, you’re at the point of crisis, completely overwhelmed – but positive things like self-care, friendships, exercise can all increase the capacity of the jar to keep that from happening. It seems simple, but unpacking and enlarging that jar is what Alastair, among plenty others, recommend to keep yourself on top if you’re struggling.

So with that in mind: my name is Sal, I am currently recovering from depression and anxiety, and on the heels of my very first Allocate People Summit, my jar is feeling pretty spacious. How’s yours today?